Purpose of this document

In our business applications, the client easily gets underestimated. Sometimes the client is more complex to develop and design than the server. While the server architecture is nowadays easily to agree as common sense, for clients this is not as obvious and stable especially as it typically depends on the client framework used. Finding a concrete architecture applicable for all clients may therefore be difficult to accomplish.

This document tries to define on a high abstract level, a reference architecture which is supposed to be a mental image and frame for orientation regarding the evaluation and appliance of different client frameworks. As such it defines terms and concepts required to be provided for in any framework and thus gives a common ground of understanding for those acquainted with the reference architecture. This allows better comparison between the various frameworks out there, each having their own terms for essentially the same concepts. It also means that for each framework we need to explicitly map how it implements the concepts defined in this document.

The architecture proposed herein is neither new nor was it developed from scratch. Instead it is the gathered and consolidated knowledge and best practices of various projects (s. References).

Goal of the Client Architecture

The goal of the client architecture is to support the non-functional requirements for the client, i.e. mostly maintainability, scalability, efficiency and portability. As such it provides a component-oriented architecture following the same principles listed already in the devonfw architecture overview. Furthermore it ensures a homogeneity regarding how different concrete UI technologies are being applied in the projects, solving the common requirements in the same way.

The focus of this document is to provide a technical reference architecture on the client on a very abstract level defining required layers and components. How the architecture is implemented has to be defined for each UI technology.

The technical infrastructure architecture is out of scope for this document and although it needs to be considered, the concepts of the reference architecture should work across multiple TI architecture, i.e. native or web clients.

The following gives a complete overview of the proposed reference architecture. It will be built up incrementally in the following sections.

On the highest level of abstraction we see the need to differentiate between dialog components and their container they are managed in, as well as the access to the application server being the back-end for the client (e.g. an devon4j instance). This section gives a summary of these components and how they relate to each other. Detailed architectures for each component will be supplied in subsequent sections 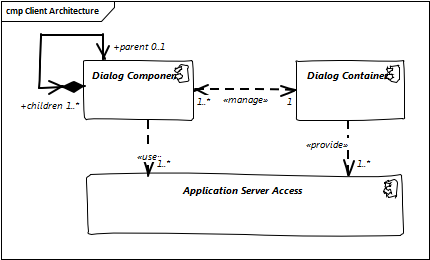 A dialog component is a logical, self-contained part of the user interface. It accepts user input and actions and controls communication with the user. Dialog components use the services provided by the dialog container in order to execute the business logic. They are self-contained, i.e. they possess their own user interface together with the associated logic, data and states.

Dialog components need to be managed in their life-cycle and how they can be coupled to each other. The dialog container is responsible for this along with the following:

Dialogs will require a back-end application server in order to execute their business logic. Typically in an devonfw application the service layer will provide interfaces for the functionality exposed to the client. These business oriented interfaces should also be present on the client backed by a proxy handling the concrete call of the server over the network. This component provides the set of interfaces as well as the proxy.

The dialog container can be further structured into the following components with their respective tasks described in own sections: 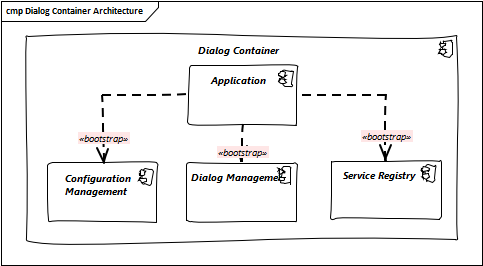 The application component represents the overall client in our architecture. It is responsible for bootstrapping all other components and connecting them with each other. As such it initializes the components below and provides an environment for them to work in.

The Dialog Management component provides the means to define, create and destroy dialog components. It therefore offers basic life-cycle capabilities for a component. In addition it also allows composition of dialog components in a hierarchy. The life-cycle is then managed along the hierarchy, meaning when creating/destroying a parent dialog, this affects all child components, which are created/destroyed as well.

Apart from dialog components, a client application also consists of services offered to these. A service can thereby encompass among others:

The service registry offers the possibility to define, register and lookup these services. Note that these services could be dependent on the dialog hierarchy, meaning different child instances could obtain different instances / implementations of a service via the service registry, depending on which service implementations are registered by the parents.

Services should be defined as interfaces allowing for different implementations and thus loose coupling.

Following the principle of separation of concerns, we further structure a dialog component in an own architecture allowing us the distribute responsibility for these tasks along the defined components: 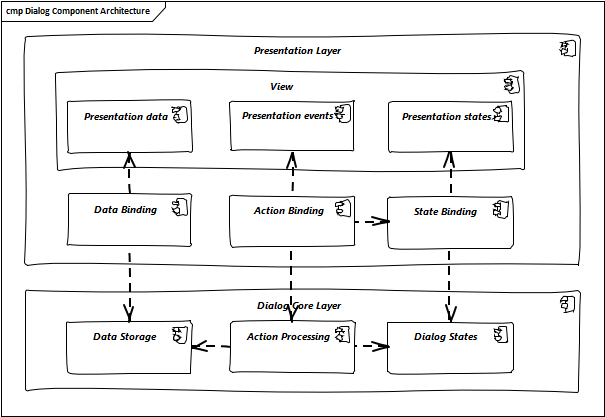 The dialog core layer contains the business logic, the control logic, and the logical state of the dialog. It therefore covers tasks T5-9:

The dialog core layer should not depend on the presentation layer enforcing a strict layering and thus minimizing dependencies.

Dialog components can interact in the following ways: 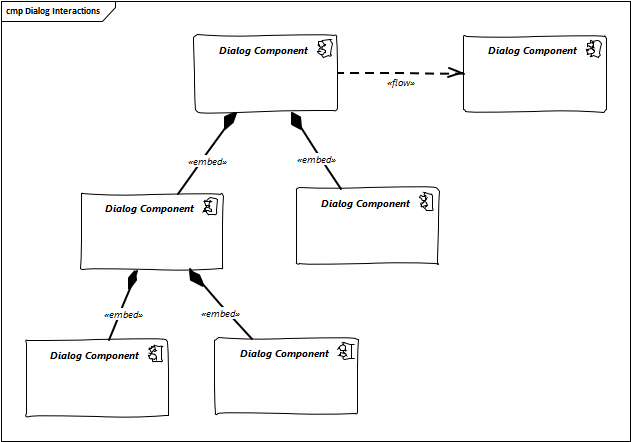 When interacting, dialog components should interact only between the same or lower layers, i.e. the dialog core should not access the presentation layer of another dialog component.

The Quasar client architecture as the consolidated knowledge of our CSD projects is the major source for the above drafted architecture. However, the above is a much simplified and more agile version thereof: